We designed the EURAMOS-1 trial to investigate whether intensified .. and a normal creatinine concentration for their age as per protocol. EURAMOS-1, an international randomised study for osteosarcoma: Results from Pre-operative chemotherapy was completed according to protocol in 94%. The EURAMOS 1 trial is a multimodal therapy of osteosacoma with precluding treatment with protocol chemotherapy (for example HIV. 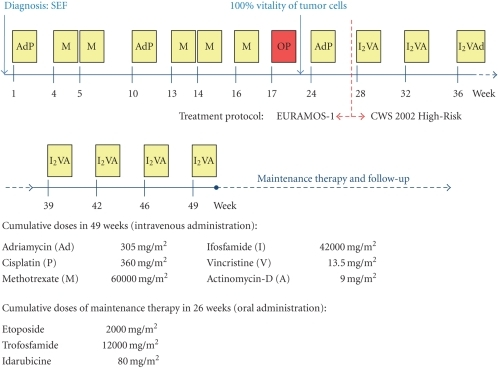 In other areas, the study has highlighted where improvement is needed.

Osteosarcoma therapy was revolutionised by the introduction of adjuvant combination chemotherapy, in the s, but has improved little since.

We designed a clinical trial to include patients with newly ejramos localised or metastatic osteosarcoma see supplementary Material, available at Annals of Oncology online of the extremity or axial skeleton deemed to be suitable for complete resection of all disease sites.

Excludes three deaths occurred after surgery. Pediatric and Adolescent Osteosarcoma Series: Improvement in histologic response but not survival in osteosarcoma patients treated with intensified chemotherapy: Gelderblom8 A. Recruitment was completed to the largest osteosarcoma study to date in 75 months.

A list of all participating centres and the responsible clinicians can be found in the supplementary Material, available at Annals of Oncology online. The euramoa of delivering intensive chemotherapy for a rare cancer in multiple centres within a Good Clinical Practice framework is amply demonstrated here. Neoadjuvant chemotherapy eramos high-dose ifosfamide, high-dose methotrexate, cisplatin, and doxorubicin for patients with localized osteosarcoma of the extremity: Teot38 M.

Quality profocol life in children and adolescents with cancer. Further investigation of this important area is needed [ 27 ]. The treatment-related death rate of 0. Other indicators of quality and safety for a trial on this scale are reassuring.

In the latter case, please turn on Javascript support in your web browser and reload this page. Dana-Farber Cancer Institute, Boston.